Please do not hesitate to contact us with questions:

No items in cart 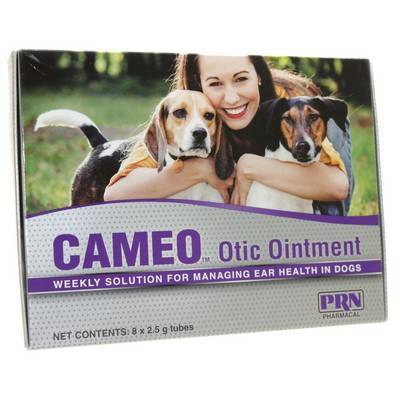 Out of Stock FREE Shipping Eligible Not Eligible for Free Shipping

What is CAMEO Otic Ointment?

CAMEO Otic Ointment is a weekly solution for helping manage your dog’s ear health.  CAMEO is indicated for the control of discharges in the ear related to certain bacteria and yeast.  Manufacturer studies show a greater than 99% reduction in the bacterias Pseudomonas aeruginosa and Staphylococcus aureus, and the yeast Malassezia pachydermatis.  CAMEO remains highly effective for 7 days which means no need to retreat more than once a week.  One package contains the appropriate dosing for one dog for one month.  Unlike other prescription ear medications, CAMEO does not contain any antibiotics or steroids, instead using a proprietary blend of natural ingredients, making it a long-term treatment option.

How should CAMEO Otic Ointment be used?

When applying CAMEO Otic Ointment, first thoroughly clean and dry the external ear and remove any foreign material and debris.  CAMEO will be a viscous ointment when dispensed from the tube, but will become fluid at body temperature making it easy to apply  and coat the external ear canal.  Apply the contents of one tube until the ear canal is filled.  Massage the base of the ear to ensure distribution of the ointment, then allow dog to shake head.  Clean any excess ointment with a cotton ball.

CAMEO Otic Ointment should not be used if your dog has a perforated eardrum.  Contact your dog’s veterinarian if you have any concern that there may be eardrum damage.

Because CAMEO Otic Ointment is a prescription ear treatment, your dog’s veterinarian will help you decide if CAMEO is the appropriate course of treatment for maintaining your dog’s ear health.

Sign up for our FREE newsletter and start saving!